How to Play Teen Patti

Home » How to Play Teen Patti

For many players who have been playing Teen Patti for years, the rules of the game and how to play it are ingrained in their memories, and they know this game as well as anything in life. However, we do all have to start somewhere and with the game continuing to gain popularity online, many new players are looking for information about how to play Teen Patti.

With the basic knowledge in place, you can follow games, get involved and win, knowing what you are doing to get that win, and when you lose, you can also follow the game around the table and see why you have lost and who has won.

Those looking to learn how to play need to do some research and reading, and here we take a look at the main aspects of Teen Patti and what you need to know before you dive in and begin playing.

Learn How to Play Teen Patti at the Best Sites

The Different Types of Teen Patti

The first point to understand about Teen Patti is that there are many different variations of the game. You will be able to start by playing the basic game, with the basic rules and get to grips with that before you do anything else.

However, one of the big draws to players of Teen Patti is the fact that these variations exist. When you become an experienced player and you are looking for something a little different, you can look to the variations to bring you that, so you stick with Teen Patti for a long time once you get started.

The variations do mean more learning as you go through the different stages, and it is always advisable to learn about the new rules before you start playing a variation. However, the good part of this is that your core basic knowledge that you learn from the start is going to stick with you for a long time.

Understanding the Teen Patti sequences that win games for you and the rules for the basic elements of the game is something you need to do. This knowledge won’t be wasted after a little while though, it will remain with you and help for as long as you play Teen Patti, which should be for a very long time given the variations that can keep things feeling free and keep you interested.

The key to success at Teen Patti is understanding the game and that begins with the basics. This is a game of chance and skill, but the cards will determine your success, so you need to know what you are looking for, how the game will develop and know when and what to bet at the right time. 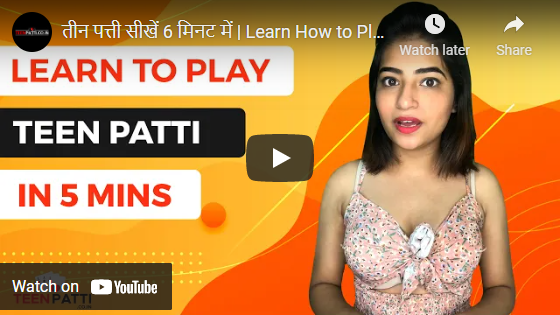 The game is played using a standard deck of cards with a total of 52 cards in the game. Most games have between three and six players involved on the table who are all in play. The first payment goes into the pay at the start of each round, this is called the boot, and is determined prior to starting, as this is a fixed fee for all games.

In terms of how you put money into the pot at the start and then add to it as you go through the rounds of the game, this is very similar to poker, another game that is very popular. It is for this reason that when it comes to the mechanics of Teen Patti and the betting side of things, those who have poker experience can often pick up the game of Teen Patti much easier than others.

What Happens During a game of Teen Patti?

When it comes to the game itself, and how everything works, there are two main ways to go, which involve either playing blind and not seeing the cards you are dealt, or playing where you can see them.

First of all, the deck of cards is shuffled and then dealt out to each player by the dealer. Those in the game will receive three cards to play with, and at this point they are given out face down so you do not know what cards you have. This is where the two options of how you play this game come to life.

You can choose to play blind, which means you will not be seeing the cards you have been dealt, meaning any bets you place are done so without knowing the strength of your hand. This means the game is a little riskier, as you could be betting into the pot but sitting with a very poor hand. Alternatively, you could have a great hand but not double up on your bets and add more to the pot to try and win a bigger amount because of the strength of your hand.

Which is the best way to play Teen Patti?

People approach the game and enjoy different aspects of it, so there is no real answer to which is the best to play, as both ways to play have their upsides and interesting features. However, the key to success in both of them is to know how they work, what you can and can’t do and more importantly, what you can do with the betting side of things in each version.

How to Win at Teen Patti?

The card numbers play a factor in the hands and will be used to split anyone who has the same type of hand. For example, if two players have a trio, one player has fours and the other has sevens, the player with sevens will win as they have the higher card as their trio.

Runs, flushes and pairs form the other hands in the game, which can all enable you to win. As you are dealt your cards, you can’t influence what hand you have and how you get it, you simply play with the hand you are dealt. However, when it comes to understanding the game that is taking place, and seeing who wins and why, it is important to know about the different Teen Patti sequences.

This will only add to your understanding of the game and help you work out what is going off, rather than leaving you confused when the winner is named.

In order to know who has won the game, you need to know how each hand ranks against each other. Here is the order in which they are ranked, and for every single one of them, if two people have the same type of hand then the player with the highest card as part of their hand is deemed to be the best.

The best hand in the game is a trio or trail. This is when you have three cards, all of which are the same number and with this hand you will almost certainly win. For example here, you will have three cards which are all sevens.

A normal run is the next hand down and is the same as a straight run with the exception that these cards can be from different suits. This makes it easier to achieve, so is ranked lower than a straight run.

A flush comes next on the list, this is three cards of the same suit, for example spades, and these can be any number. To differentiate players with a flush, the best flush to have is one with the highest card as part of it.

Rounding this off, a pair is the next type of hand on the list, this is two cards which are the same plus one other that doesn’t count. Lastly, the final hand is a high card, where you have nothing other than your highest card. 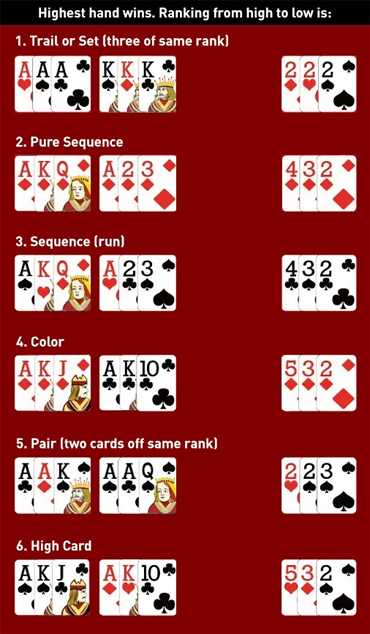 As mentioned before, Teen Patti is a really exciting game that is only enhanced by mobile gameplay. But before you get stuck in, you first need to choose where to play. We advise taking a look at our list of recommended Teen Patti Cash sites for the best options in India.

When you’ve chosen your Teen Patti site and registered as a new customer, head over to the casino section of the site to see what versions of the game are on offer. Many of the best online casinos in India will feature Teen Patti games from three well-known game providers: Ezugi, Super Spade Games and WOO HOO Games.

Once you’ve chosen the game you want to give a try, you need to select your stake. We’d always suggest starting with small stakes first while you are still learning how to play Teen Patti. When you completely understand the rules and become more confident you can increase your stakes. Don’t run before you can walk!

What is Teen Patti?

Teen Patti is a famous Indian card game which many describe as a simplified version of Poker. The name Teen Patti literally translates as 3 cards in English.

How to play Teen Patti for real cash?

In recent years many online casino sites have started to cater for their Indian customers by offering localized games. Teen Patti being one of them. Simply choose an online casino, register as a new user and get playing.

How to play Teen Patti at TeenPattiCash?

Read our independent Teen Patti Cash site reviews to discover which ones are the best for you. All the Teen Patti sites we feature are legal and safe to play at from an Indian player perspective.